Dominican Sister of Peace Patricia Kilbane, OP (formerly Sr. Ellen Patrick), was born and raised in Chicago by her parents Ellen (Garrity) and Patrick Kilbane. Sr. Pat entered the Novitiate of the Dominican Sisters of St. Catharine of Siena, St. Catharine, KY (now Dominican Sisters of Peace), in 1949 and made her First Profession of Vows in 1951. She earned a BA in education and history from Siena College, (Memphis, TN) in 1956 and an MA in education and history from Creighton University (Omaha, NE) in 1967.

After her Profession, Sr. Pat began a long career in Catholic education teaching in elementary schools in North Cambridge, MA; Williamstown, NJ; and Hastings, NE. She served as the principal of Grand Island Central Catholic High School (Grand Island, NE) and was an instructor in the graduate school of Creighton University for one year. After her career in education, Sr. Pat began a 25-year career in addiction education and addiction counseling. Back in Chicago, She worked for Catholic Charities, served as the Director of Alcohol and Drug Education at the Central States Institute of Addiction, and served as the Executive Director of Intervention Instruction, Inc., which she co-founded with Monsignor McDermott in 1974. Sr. Pat was a dedicated volunteer at Intervention Instruction until the time of her death in her Chicago home on March 13, 2013.

Sr. Pat will be remembered for her devotion to her Irish heritage, her love of history and politics, and her serious commitment to her own recovery and her spiritual journey. As a Dominican, she was always reading and studying and keenly interested in new ideas and spirituality. Sr. Pat was consistently committed to her exercise programs. She was an eager participant in the newly formed Dominican Sisters of Peace and will be missed by all who shared life with her during her 64 years as a Dominican Sister. 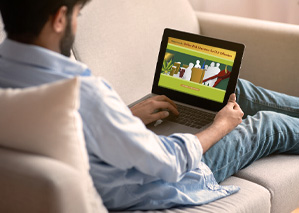 Hope it will educate more people.

I will never drink & drive again!

This course should be REQUIRED for getting a permit to drive. Thank you for your help. I will live longer & happier as a sober father.

This class was very informative & helpful. It gave great insight on how I was thinking & how to avoid another DUI by not giving into peer pressure.

This program is an excellent alternative to taking the classes in a group.

It would have been nice if they had something to this effect in drivers ed when I was younger.

The course was put together very nicely; informative & concise.

I'm glad I was able to complete this DUI course online because it was easier than having to rearrange my work schedule to attend classes in person.

I will never drink and drive again!

It was very helpful to me. Thank you very much.

This is great, because I live in Tennessee & they don't offer a 10-hour DUI class here.

Your program was very helpful in identifying the effects that alcohol can have on someone who not only drinks but decides to get behind the wheel after drinking.

I actually learned quite a bit. It's a great way to learn about the affects of alcohol on a person & their family. The interactiveness & Q&A sections are really key in making the person evaluate their life & their involvement in alcohol.

The whole DUI experience has been, yes miserable, but enlightening. I have a better understanding about who I am when I'm around alcohol & what it does to me & my body. Thanks.

I actually learned quite a bit & retained that knowledge. Good format & interesting examples. I now educate others on the risks of drinking with true facts.

I really learned a lot intellectually but more importantly, steps to help me separate drinking & driving. I found the course to be very informative & interesting. I have passed interesting info on to friends. 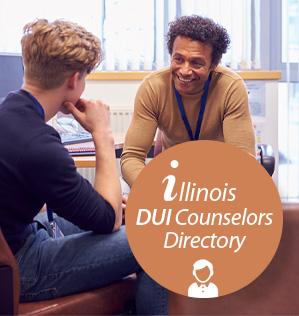 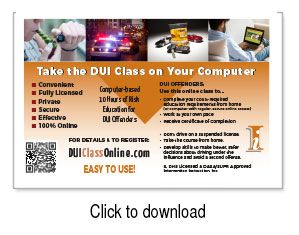